Approval of minutes from the 2019 annual member meeting:

Please join us after the annual meeting at 3:00 pm for a virtual guest research presentation, in conjunction with the University of Minnesota Duluth Biology Department. Recording of presentation HERE. 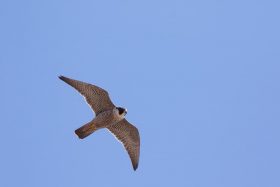 Joe Barnes, Nongame Wildlife State Specialist, Nevada Department of Wildlife will present Peregrine Falcons as a Biomonitor: A Local Study Taken to a Continental Scale. Joe has conducted research on Peregrine Falcons from 2004-2019: his work that began in southern Nevada with a population status update, habitat use modeling, and developing survey methodology, and gradually began including a dietary analysis, territory turnover, mercury (Hg) contaminant analysis, and population genetics.  Collaborations expanded his peregrine work to include research in various locations across the U.S., and my Hg research began including several other species of raptor and other birds.
Joe Barnes Biosketch
Joe is the statewide Staff Specialist for nongame terrestrial species with the Nevada Department of Wildlife. He received a B.S. in biology from Baldwin-Wallace University and M.S. with an emphasis in ecology from the University of Nevada, Las Vegas in 2011.  After completing his undergraduate studies, he worked for several years as a high-seas fisheries biologist in Alaska, Hawaii, and Japan before shifting to raptors.  For his thesis, he studied a resident breeding population of Peregrine Falcons while conducting prey and habitat-use analyses, and developed a new call-broadcast survey approach.  After finishing his graduate studies, he worked on several targeted research projects looking at Golden Eagle habitat-use in relation to renewable energy projects throughout the southwest U.S. and Mexico.  Responsibilities for his current position cover all nongame taxa in Nevada, but he has been able to continue his focused research on peregrines, Golden Eagles, and Ferruginous Hawks.  Additionally, he has contributed for several years on a long-term study of migrating Peregrine Falcons on Padre Island, Texas and also led a population assessment of peregrines on the Channel Islands, California. In addition to the above projects, he has experience working with raptors in far-flung locations such as Gyrfalcons in northwest Alaska, Red-shouldered Hawks in Wisconsin, and Swainson’s Hawks in northern California.
« Hawk Weekend Festival – CANCELED DUE TO COVID-19 — Virtual Advanced Raptor Identification with Bill Clark »