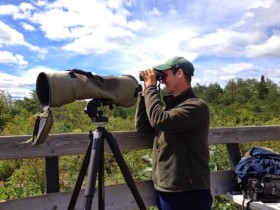 On behalf of the Hawk Ridge Board of Directors, I would like to welcome back our staff, volunteers, and visitors to another season of migration at Hawk Ridge Bird Observatory! We have several new staff members this fall and several who are returning. Hawk Ridge Count Director, Karl Bardon, has returned for his 8th season with Hawk Ridge.

Most of you know Karl as the guy who counts all the birds at Hawk Ridge during the fall season — songbirds in the morning, hawks during the day, and right now, migrating nighthawks in the evening. In fact, Karl has tallied many Minnesota state records for bird counts, ranging from Golden Eagle to American Goldfinch and innumerable species in between. Among his other awards, Karl was honored by the Minnesota Ornithological Union both in 2010 and in 2013 for special achievement in field ornithology. However, what you may not know about Karl (an art graduate of the University of Minnesota), is that he currently has an exhibition that is ongoing at the Great Lakes Aquarium in Duluth through September 8, featuring his paintings and his photography. His subjects include warblers, waterfowl, raptors, and other birds. The show is a visual feast, including my favorites “Ovenbird Flight Song”, and “Herring Gull at Knife Island”. The photography exhibit features amazing warbler images from Park Point, and raptor photographs from throughout northern Minnesota. If you haven’t seen the show, I encourage you to take advantage of the next ten days to see these uniquely expressive paintings and beautiful photographs. 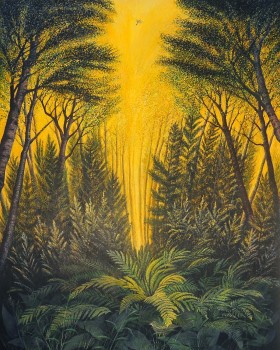 A Celebration Of Birds