Blustery Day with the Turkey Vultures

What a windy day it was! The cool, damp and gusty winds out of the northeast moved today’s migrating birds through the skies at incredible speeds. During the few slower times today, the magnificent whisps of slate and silver-colored clouds filled the air. Migrating leaves were seen here and there, and exciting flocks of songbirds pushed through. By the time 3:00pm came around, the hawk counters had tallied 254 raptors for the day.

Most of the warblers have already pushed through, however some hardy butterbutts (Yellow-rumped Warblers) as well as Palm Warblers made appearances today. White-throated Sparrows & White-crowned Sparrows made their presence known by foraging through the underbrush, as well as migrating by. Distant flocks of blackbirds were seen. Some of the distant flocks & high-flying flocks of blackbirds were difficult to identify, however some of the closer flocks contained Brown-headed Cowbirds & Red-winged Blackbirds.

Turkey Vultures were the most numerous bird on the daily count display today. Their dihedral-forming wings and teetering motions complimented how we felt today, as we braced ourselves against the gusty winds. This is meant in only the best way, I assure you! Without properly bracing ourselves, the wind was testing our ability to hawkwatch while standing upright. One way of looking at the flight behavior of Turkey Vultures, is that they are the one species which flies “with” the wind, while other raptors fly “through” the wind. Although all ages have similar-looking feathers, juveniles have black heads, whereas the adults (shown) have red heads. 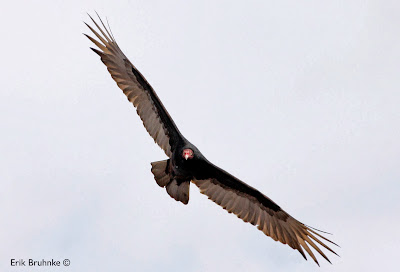 We are seeing greater numbers of large raptors, at the October days progress. Red-tailed Hawk and Bald Eagle numbers will continue to increase as the month advances, however one large raptor species which has already peaked in migration is the Osprey. A few Osprey made appearances at the ridge today, and before we know it they will have migrated entirely through the area. Here is an Osprey photographed at Hawk Ridge from just a few days ago. They have gorgeous mottled wings and a striking black mask. When seen flying by, they often looked like an oversized gull, in that they host a long and downward-curved set of wings. One unique field mark that they share with a northern-dwelling raptor (the Rough-legged Hawk) is a carpal patch, which is the dark patch in the mid-wing (shown) below. 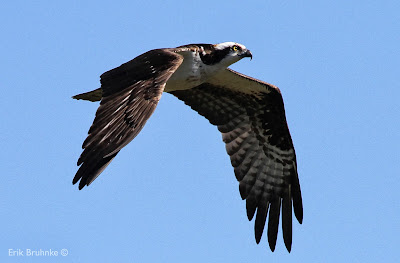