Migrating from the Northwest

September 21, 2013 Leave your thoughts
Northwestern winds are often thought of as the preferred winds for exciting flights of birds at Hawk Ridge. All day today, winds blew with considerable force out of the west and northwest. The air was cool & refreshing, and nonstop streams of warblers pushed through the area as did kettles of Broad-winged Hawks! Why was today such a busy day (migration-wise) at the ridge, and what can you expect for this upcoming Hawk Weekend?
When cold fronts push through, these winds can alter the insect populations in line of the storm’s path. When the warblers’s food (primarily insects) is reduced well north of here due to cold fronts, these amazing little birds are forced to meander southward. Quite often Sharp-shinned Hawks will follow the big pushes of songbirds coming through  The hearty Yellow-rumped Warbler were the most commonly observed warbler species today. Warblers are really pouring throughout the area as they make their way towards their wintering ground!. Although not as commonly seen today as the Yellow-rumped Warblers, a considerable amount of Palm Warblers moved through the skies. While count interpreting yesterday, I pointed out several other migrating warblers including American Redstarts, a Magnolia Warbler, Yellow Warbler, Black-and-white Warbler and even.a Bay-breasted Warbler. Several American Pipits and Horned  Larks passed through the breezy skies as well. By the time 4:00pm came around, 469 Sharp-shinned Hawks had been seen at Hawk ridge.as did 638 Broad-winged Hawks!
Adult male American Redstart. Very flashy and vocal warbler species seen today! 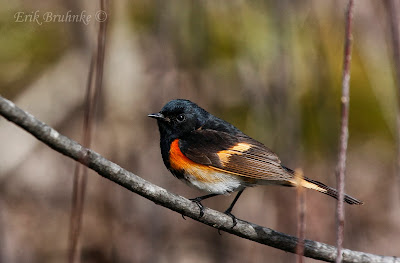 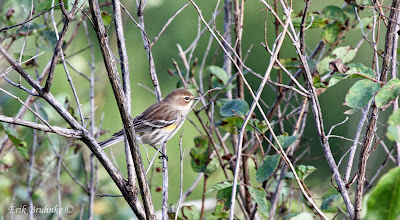 Here is an adult Peregrine Falcon from early this morning. 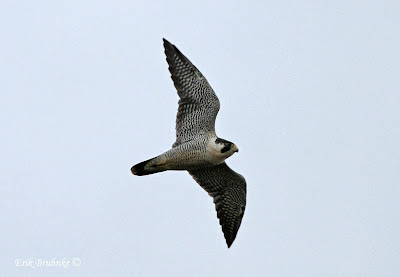 The recent cool front that moved into the northwoods has definitely sparked migration, both currently in the present day, and for the upcoming days of Hawk Weekend! Get ready for some fun flights of birds moving through the western tip of Lake Superior this Hawk Weekend.