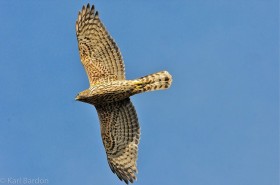 October 13, 2013 Leave your thoughts
Raptors
This has been a great week to be up at Hawk Ridge, with a good variety of raptors being seen, and spectacular fall colors. Last week I was surprised to see so many Broad-wings moving, while this week I was surprised to see so many Red-tails, including a surprise flight of 662 on October 7th. Usually there is a long period in late September and early October between the peak of the Broad-wings and the peak of the Red-tails, but this season they seem to have nearly overlapped. The first Golden Eagles of the season showed up on October 7th, including one that completely lacked a tail! Northern Goshawks are now being seen daily at the Ridge, most of which are juveniles and second-years- no doubt even better numbers will be moving in the next few weeks. The weather has been mild all week, with temperatures as high as 73 degrees on October 9th, and still no frost, so I suspect we will continue to see a good variety of raptors as the early season species overlap with the late season species.
Non-raptors
As expected, the variety of non-raptors moving through this week has dropped sharply, but there are still good numbers of birds, with over 21,000 non-raptors counted during the week. The bulk of the movement now is American Robins and Rusty Blackbirds, but mixed with these flocks you can still see Cedar Waxwings, Purple Finches, American Pipits, Horned Larks, Lapland Longspurs, and Eastern Bluebirds. Although a few Blue Jays and Yellow-rumped Warblers are still flying by, these species are well passed their peak for the season. Flocks of American Crows have started moving down the shore, and on October 6th a nice flight of 169 Sandhill Cranes came over the Ridge. Hopefully there will be very large flights of Rustys and robins in the next week or two.