The most amazing cloud formations and colors filled the skies today, as winds blew gently off of the lake. The skies were relatively quiet regarding the larger raptors, but the small Sharp-shinned Hawks kept the day’s total count running high today. Of the 257 raptors observed today, 243 of them were Sharp-shinned Hawks.

Here is a Sharp-shinned Hawk migrating past Hawk Ridge from a few years ago. This individual was on its second fall migration when the photo was taken. A juvenile Sharp-shinned Hawk would be showing a yellow set of eyes, with brown wings and brown vertical streaks throughout the underbelly. An older adult would show a dark red eye with the adult plumage of reddish horizontal barring and slate-gray wings, backside and tail. The bird in this photo shows the adult plumage, but hosts an orange eye, which is commonly seen during that 1st/2nd year transition of the bird’s life. 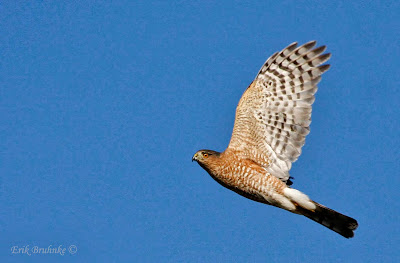 Here is a juvenile Sharp-shinned Hawk, photographed in Duluth just a few weeks ago. Note the brown plumage, vertical streaks, and pale-yellow eye. 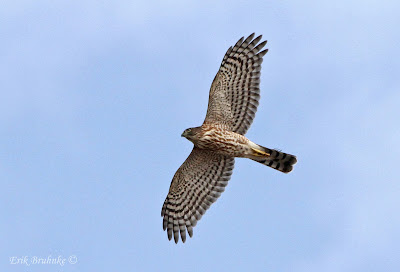 Tomorrow may be a rainy day… We’ll have to see. Many fun times are in store at the ridge.
Good hawkwatching!
Erik Bruhnke
Hawk Ridge Count Interpreter