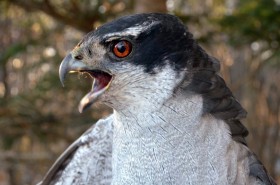 There was no passerine or owl banding during the period, except for a Northern Shrike captured and banded on November 12. Uncooperative weather kept the owl banding from opening, and is likely done for the season. A season end total for all raptors (hawks and owls) will be provided in the next blog.

Hawk banding was surprisingly good especially on several days with strong northwest winds. November 11th and 12th provided 16 raptors of the 24 captured during the period. Although few non-eagles were seen on the count or observed at the banding station, a high percentages of those seen were captured. The breakdown is as follows: 15 Northern Goshawk (7 ASY, 3 SY and 5 HY), 6 Red-tailed Hawk and 3 Rough-legged Hawk. Highlights were 2 adult light rough-legs (male and female) on the 11th and a return goshawk that was banded as an after-second year on November 19, 2005, at Hawk Ridge (hatch in 2003 or earlier) making it at least 10 years old!!!