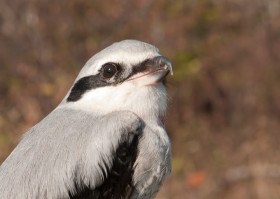 The migration has been slower than hoped for during this period. Passerine banding has ended for the season, except for the occasional bird in the raptor nets. Owl migration was good for the first week, until unfavorable weather restricted banding during the end of the period. Annmarie is hoping to get a few more nights in before the snow falls. Hawk banding has been a rollercoster with mostly slow days, but there were a few days of flights where we were able to catch  some birds.

The passerine total for the season at the overlook was 222 birds of 18 species. The high numbers were Black-capped Chickadee with 50, White-throated Sparrow with 82, and Slate-colored Junco with 39. Banding at the overlook was done to primarily educate the public with an emphasis on family and kids. It was a huge success.

At the main station, we banded 1544 birds of 66 species. High numbers for banded birds were 61 Veery, 66 Swanson’s Thrush, 206 Nashville Warbler, 123 American Redstart, 143 White-throated Sparrow, and 124 Slate-colored Junco with all the juncos coming in 5 days. So 1762 birds banded through 10/30 for the project, which is a very respectable total given the relative lack of birds this year. We covered 42 days at the main station and 13 days at the overlook. Thanks to everyone for supervising banding this year. It continues to be the main impediment to getting more days covered.
-David Alexander
﻿﻿
In November a total of 86 have been banded, which includes 67 Northern Saw-whet Owls and 19 Long-eared Owls. The best night was on the 1st when there were 22 Saw-whets and 6 Long-eared Owls. Of the 67 Saw-whets banded during the month,  80% were hatch year, which now brings our season hatch year total to 21%.
-Annmarie Geniusz
The hawk banding will continue until the 30 of November, but primarily from the main station as Chris Neri and Nova Mackentley have returned to Whitefish Point, Michigan where they live and work. It was great having them back for their third season. The month of October total of 625 hawks banded is as follows: 1 Bald Eagle, 2 Northern Harrier, 426 Sharp-shinned Hawk, 20 Cooper’s Hawk, 51 Northern Goshawk, 2 Broad-winged Hawk, 88 Red-tailed Hawk, 18 Rough-legged Hawk, 4 American Kestrel, 10 Merlin and 3 Peregrine Flacon.
In the first ten days of November, there have been 28 hawks banded which includes: 1 Sharp-shinned Hawk, 9 Northern Goshawk, 8 Red-tailed Hawk and 10 Rough-legged Hawk. Other highlights this month included the observation of an adult light morph Swanson’s Hawk that spent part of the day hunting the fields and perching on hay bales at Moose Valley site on the 6th. Also seen at that location was a rare visitor to Duluth, a flyby Black-billed Magpie on the 5th.
-Frank Nicoletti, David Alexander, Chris Neri and Nova Mackentley.
﻿﻿
﻿﻿Frank Nicoletti