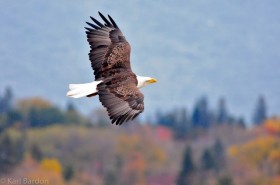 November 5, 2013 Leave your thoughts
Raptors
Most of the week was heavily overcast with fog, mist and drizzle, giving us some very low counts for raptors and non-raptors, but the good news was that once this weather cleared out with west winds on November 2nd, we got a great push of birds including 141 Bald Eagles, 21 Golden Eagles, 10 Northern Goshawks, and 155 Rough-legged Hawks. This count of Rough-legs is the third highest for Hawk Ridge, and the best flight since 1994 when 176 were seen on November 29th (the record count is 204 birds seen at the Ridge on November 10th, 1963). With most of November yet to come, when the majority of Rough-legs often move through, I am hoping for some more great Rough-leg days. In contrast to last year when very few juvenile Rough-legs were seen, this year there are good numbers of both adults and juveniles. Although it seems likely that most Red-tails and Northern Goshawks have moved through, no doubt there are still good numbers of Bald and Golden Eagles yet to come. If we get a major cold front in the next few weeks, there will likely be hundreds of Balds and dozens of Goldens riding the Ridge.
Non-raptors
The same weather which held back raptor migration for most of the last week also did the same for non-raptors, with a great flight commencing on November 2nd, when 4881 non-raptors flew over, most of which were American Robins, but a good diversity of other species showed up as well, such as Horned Larks, American Pipits, Snow Buntings, Red-winged Blackbirds, Rusty Blackbirds, Eastern Bluebirds, and a few Pine Grosbeaks and Red Crossbills. Most non-raptor migration is usually done by November, so this flight was somewhat unusual. With continued relatively mild conditions (and still some fall color left in the trees!), it seems possible that we will see more of these species.
A few Boreal Chickadees have shown up, including two on November 2nd, so perhaps this is the beginning of an irruption for this species. In contrast, it is quite clear by now that this is one of the worst finch years I have ever experienced. Whenever there have been good irruptions of northern finches during these non-raptor counts, they have peaked in late October, so it seems doubtful that any large numbers are still on their way. In the last five years, the overall number of finches counted has varied from 13,000-50,000, and this year the total is only at 11,819, most of which were American Goldfinches. A few of the northern finches can be expected in their usual range within the boreal forest of course, but I doubt that very many of them will make it further south this winter. Nevertheless, a local bumper mountain ash crop is already attracting robins, bluebirds and waxwings (including Bohemians), so perhaps it will be a good season for berry eaters.
This blog was made possible by generous assistance from Cory Ritter, Andrew Longtin and Joe Beck: we may not have built the Eiffel Tower or the Lift-bridge, but we certainly have counted a lot of birds together! Thanks guys!
Karl Bardon
Count Director
Hawk Ridge Bird Observatory