Mid-October blend of Raptors and Songbirds 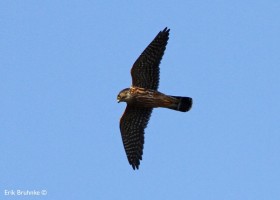 Birds were moving through the main overlook in exciting numbers today! By 4:00 this afternoon, 409 raptors had been tallied by the Hawk Counters. Earlier in the morning hours, flocks of Cedar Waxwings and American Robins made their way through the open skies. A stunning Merlin made several passes at the plastic owl near the hawk-counting platform. Merlin are the mid-sized falcons of stealth, speed, fast wingbeats, and direct flight paths. The photo below shows the Merlin diving at the owl this afternoon.

Four Peregrine Falcons were observed this afternoon. While being supported with a tailwind out of the northeast today, these long-winged raptors propelled themselves through the air with effortless-looking wingbeats. Like other raptors, Peregrine Falcons can be found migrating over nearly any angle and position of Hawk Ridge. Many raptors are more-likely to be found migrating closer to where their food source is, and coincidentally, several of the Peregrines today were seen on the lake-side of Hawk Ridge. These beautiful falcons can pursue pigeons with sheer stealth, however they also follow their food sources quite closely (waterfowl, and earlier on in migration, shorebirds).

Four beautiful Northern Goshawk were observed today from the hawk-counting platform, with three of them being seen in-hand! Their smaller relative, the Sharp-shinned Hawk, was the star of the day (number-wise), with 324 of them being tallied by 4:00 pm today. Over the 1-2 weeks, we’ll likely see some of the largest Northern Goshawk numbers of the season, passing through Hawk Ridge. This is a special time of the fall migration, with this claim-to-fame species pushing through.

A little finishing touch that I wanted to share with today’s Hawk Ridge blog, was a photo of a juvenile Cedar Waxwing finding that spot to itch just after it had landed on the branch. It is a treat to see these beautifully-colored songbirds migrating through. From time to time they take a breather from migration, and “fall out” from the sky, often landing in areas that can cater to their nutritional needs.

There is a quickly-approaching cold front on the way. Cold fronts equate to bursts of birds coming through, raptors and songbirds alike. This weekend and early next-week could be great for migration, despite the slight chances of rain down the road. Bring on the birds!