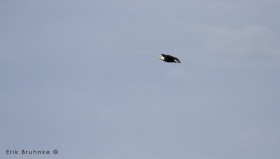 Today’s flight of raptors was a relatively slow one. The dense air and south winds kept much of the migration at bay. Weather plays a dramatic role on raptor migration from day-to-day. With the tough migrating conditions earlier today, birds had to fly into a headwind, in addition to manually “propelling” themselves through the damp air.  By 3:00pm today, the hawk counters had tallied 14 raptors. The day started out on a special note, with the first raptor of the day being a dark morph Rough-legged Hawk!

Gusty winds kept even the most stable-footed hawkwatchers on their toes. The birds as a whole were low-flying, with several Bald Eagles were seen below the lookout on the lake-side of the overlook. Shown below is a distant adult Bald Eagle migrating by today!

The dense, northward-blowing winds also made it difficult for songbirds to cover great distances while heading south.  A sizable flock of beautiful Snow Buntings made their way southward in the mid-morning hours. Other highlights from the day’s flight included at least two Northern Shrikes (adult, shown in the image below), and an uncommon-for-the-area Red-bellied Woodpecker. As the Red-bellied Woodpecker flew by, it hosted the red top of the head, as well as the black wings with bold white crescent that can be seen on each wing. They are a stunning woodpecker species, found more commonly south of Duluth away from the boreal forest.

Tomorrow’s forecast is calling for cloudy skies and strong winds out of the northwest. It could be a good day, as well as could Sunday. Northwest winds are often associated with cold fronts moving through. Should a significant flight of birds push through, the main push of birds could start mid-day/early-afternoon tomorrow, and go throughout Sunday and into Monday. With today’s slow migration, there aren’t many raptors that will push through first thing tomorrow morning. Give them time, and they will come. Bring on the cold front!

See you at the ridge!