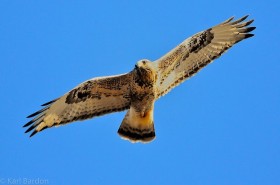 The last two weeks of October are always my favorite time for raptor flights, when all the larger, attractive hawks migrate against a backdrop of peak fall color. The migration has been dominated recently by Bald Eagles, Golden Eagles, Red-tailed Hawks, Rough-legged Hawks, and Northern Goshawks. Surprising numbers of Rough-legs have been the highlight the last week, including counts of 49 on October 22nd, 30 on October 23rd, and 31 on October 24th. This Rough-leg flight has been dominated by juveniles, suggesting good production of young in the arctic, which is refreshing after last year when juveniles were virtually absent. The flight of raptors on October  21st was one of the best I have seen at Hawk Ridge, including 135 Bald Eagles, 7 Northern Goshawks, 1135 Red-tails, 17 Rough-legs, and 20 Golden Eagles, especially since periodic snow squalls seemed to induce the birds to cut inland, often coming directly over the counting platform. Interestingly, despite continued northwest winds during the subsequent three days, the overall flight of raptors slowly decreased each day. Another pocket of birds seems to be arriving with a fresh cold front on October 26th, so hopefully the next week will be full of fun raptors.
Non-raptor migration has been slowly winding down the last few weeks, with about 16,000 counted in the last week. The season total is now at 264,838 migrating non-raptors, which is probably about average. Rusty Blackbirds and American Robins have been the most common migrants the last two weeks, including peaks of 5,246 Rusty Blackbirds on October 13th, and 4,551 American Robins on October 19th. It is still possible we will see another large push of robins, since I usually associate their peak with the departure of leaves from the trees, which has happened as late as October 31st. Steady numbers of American Crows have also been marching down the shore over the last few weeks, including a peak of 1607 on October 19th. The great variety of songbirds we see earlier in the season has been mostly replaced by more wintry types such as American Tree Sparrows, Dark-eyed Juncos, and Snow Buntings.
Eastern Bluebirds have been remarkably common the last few weeks, with a state record count of 262 on October 18th. The bluebirds just seem to keep coming and coming: on October 23rd another 158 Eastern Bluebirds flew over, including a single flock of 60, which is the largest flock I have ever seen, and on October 26th another 174 Eastern Bluebirds flew over, including two Mountain Bluebirds, which briefly landed in a spruce tree. The season count is now over 1018 Eastern Bluebirds, which is by far the best season yet!
Karl Bardon
Count Director