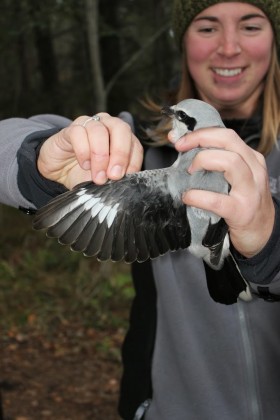 There was no passerine banding this week except for education programs at the overlook. There will be a full report on all passerine banding in the next blog posting to date. The only exception was two birds banded that were caught in the raptor nets, both adult Northern Shrike. Always exciting to capture and band these songbirds which are very raptor like and bite and rip like no hawk or owl!!!!

The owl migration has been steady with fewer big nights of Saw-whets and larger owls starting to move. The best night was on the 26th which coincided with our last public owl program. The staff and volunteers did an amazing job with educating the nearly 60 folks. We were able to bring up both Saw-whets and Long-eared Owls. The night ended with 34 Saw-whets (1 retrap), 33 Long-eared and 1 Barred Owl which had its own band!!!!
The weekly totals of 200 owls are as follows: 134 Northern Saw-whet Owl, 63 Long-eared Owl and 3 Barred Owls.
-Annmarie Geniusz

Hawk banding has been slower then expected especially after the flight of the 21st with flights reduced everyday since. The bulk of Red-tailed Hawks seem to done, which is somewhat surprising, and the goshawk numbers are lower than in past years. However, we have been enjoying capturing and banding Rough-legged Hawks which are always a treat to see and our first adult Goshawks.