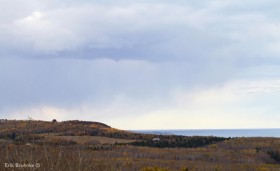 Hawk Ridge was filled with a steady flight of birds moving through today, which tapered down towards the mid-afternoon hours. A refreshing & light west wind kept some of the raptors overhead, however most of them were seen kettling towards the lake-side of Hawk Ridge. Being just beyond the middle days of October, we’re seeing steady numbers of Northern Goshawk flying through, with fewer Sharp-shinned Hawks each day. Many of the Sharp-shinned Hawks coming through now are adults. Shown below is the view (from the main overlook), looking up the North Shore; just after the brief icy rain had fallen.

Visitors throughout the main overlook were treated to the upcoming cold front, beginning to move through today. As Saturday comes around and Sunday approached in the near future, there is a good chance that we could see bursts of raptors moving past Hawk Ridge. Snow tends to have very little effect on raptor migration, whereas rain tends to be a limiting factor with the daily flights of birds. Rain and snow can “bunch-up” the groups of raptors, and push them through in concentrations if the winds are satisfactory for migration. There are few things more amazing, then seeing raptors migrating in snow! In addition to the many Red-tailed Hawks seen today, Songbirds were also coming through in fair numbers today. While pointing out raptors to visitors, I pointed out several Yellow-rumped Warblers and several Purple Finches migrating overhead. Shown below is an Eastern Bluebird migrating past Hawk Ridge, photographed today from the main overlook.

Here is a flock of Lapland Longspurs migrating past Hawk Ridge this afternoon. They bob and undulate through the open skies while migrating, and have two commonly-heard call notes. In flight, Lapland Longspurs can produce a soft, high-pitched “chew” call note. They can also produce little bursts of gurgly/chattery trills.They are a beautiful songbird species that breeds throughout the arctic tundra, and are only seen here (locally) during migration.

Bring on the cooler skies and possible chance of snow. Cold snaps can result in birds migrating through! We should be seeing Northern Goshawk, Bald Eagles, Golden Eagles, Red-tailed Hawks and Rough-legged Hawks coming through soon.

Good hawkwatching. Be sure to bundle-up and bring your binoculars along if you come up to the main overlook! Birds should be flying, and it’s going to be on the cooler side. See you there this weekend!