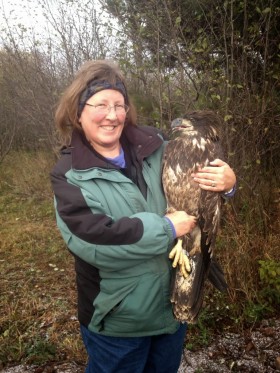 The passerine banding has pretty much ended, except for weekend banding education demonstrations at the main overlook. There will be a summary at the end of the month of the passerine totals. Owl migration continues, but numbers seem lower. This could be related to weather and full moon, which seem to have an effect on capture rate at least at this site.  Migration of large hawks are now picking up and we have had some nice flights.

A total of 83 owls were banded for the week which include: 68 Northern Saw-whet Owl, 13 Long-eared Owl and 2 Barred Owl. The best night occurred on the 19th with an owl program, when 33 owls were banded of three species! We were able to show the nearly 60 participants many Northern Saw-whet Owls, a Long-eared and Barred Owl.
~Annmarie Geniusz, Owl Bander

I would like to thank the staff and banding assistants this past week.