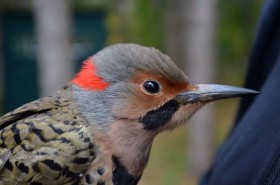 David Alexander was teaching and training new banders at Braddock Bay, NY for a course. Thus, passerine banding was conducted only on October 1st with 61 birds banded, highlighted by 8 species of warblers including Black-throated Green Warblers. A few Blue Jays and a Northern Flicker were captured and banded in the hawk nets during the week as well.

Owl banding is in full swing now with 165 and just over 100 on the the 6th and 7th. We are finally catching hatch-years on the two large nights, but only small percentage. The season total is now 482 which includes: 475 Northern Saw-whets (33 Previously banded), 6 Long-eared and one Barred Owl.