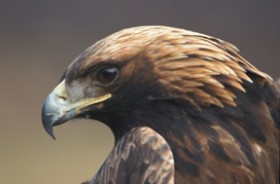 This species is named for the golden crown and nape feathers.

Hunting habits: Normally takes just about anything in the size range from insects and small mammals to skunks and prairie dogs. Very rarely recorded taking prey as large as full-grown deer and antelope.

Nesting habits: In the West, Golden Eagles often don’t breed during cyclic lows of black-tailed jackrabbits. Many of the pairs of the northern Canada population, which supplies the bulk of the golden eagles seen at Hawk Ridge, may not breed during snowshoe hare lows, but some probably at least attempt to breed where hares remain or in areas of alternate prey. Most nests are on cliffs, some in pine trees or on mounds. Each pair uses 2 or 3 nests in rotation. The pair often adds leafy green branches to the nest. The female does most but not all of the incubating. The 1-4 eggs take 43-45 days to hatch, and it is at least another two months before the young learn to fly.

Life expectancy: One in captivity lived to 46 years. One banded bird was killed when 10 years, 5 months; another survived 17 years, 1 month.