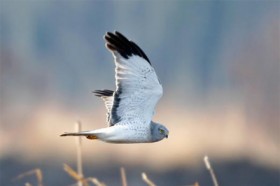 The name “harrier” comes from its habit of raiding or harrying its prey.

Nesting habits: Nests on the ground. Lays an average of 5 eggs. Female incubates for about a month. Young fly when about a month old.