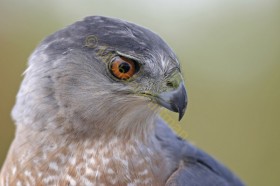 Named for William Cooper, who shot the type specimen in 1828.

Hunting habits: Catches small to medium-sized birds and mammals on the wing, from warblers to flickers and doves to chipmunks, squirrels, and even fish. One study in New York showed that European Starlings were the most common bird eaten.

Nesting habits: Highly variable nesting but generally in large coniferous or deciduous tree; often on top of a pre-existing base of a squirrel or raptor nest. The species nests locally in the Duluth region in extensive forests, woodlots, and commonly in pine plantations or suburban areas. Like many raptors, the species will vigorously defend their nests. Nests are typically 8- 15 meters (25-50 feet) high with clutch sizes ranging from 3-5 eggs. Incubation lasts from 30 to 36 days and young leave the nest after 30-34 days.

Migratory habits: At Hawk Ridge most individuals migrate from mid-September to early October; though migration can begin in early August and individuals have been counted as late as early December.