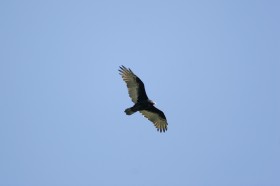 Turkey Vultures are named for their red heads which resemble the heads of a Turkey, as well as their dark bodies which also resemble adult male Turkeys. The vulture­ portion comes from the Latin word vulturus which means tearer describing their eating habits.

Hunting Habits: Turkey Vultures feed almost entirely on carrion and do not kill their own prey. They prefer freshly killed carcasses rather than rotted ones, and have an excellent sense of smell which is unusual among birds. While they prefer fresh kills, they are sometimes forced to wait for the flesh to soften enough for them to pierce the hide. They do not have talons like other birds of prey. And their head has no feathers to get dirty as they feast on carrion.

Migrating Habits: Turkey Vultures are close to the same size as eagles, but their body weight is significantly lighter which permits then to soar easily. They do migrate south in the winter and are usually gone from the North by mid-October, and return later in the spring than Bald Eagles.

Nesting Habits: They do not build compete nests, rather often use other abandoned nests, or chose a spot on the ground in the leaves, or soil. They typically lay 1-3 eggs with 2 being the most common number. Both parents will incubate the eggs for 30-40 days. Birds will fledge between 60-84 days after hatching, and generally leave the nesting area at about 120 days.

Life Expectancy: The oldest banded Turkey Vulture was at least 16 years and 10 months, and recaptured in Ohio where is was originally banded. In captivity they can live over 30 years.