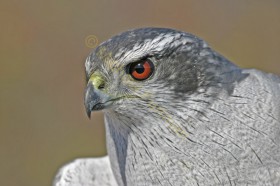 The Northern Goshawk is one of the trademark species observed at Hawk Ridge; a place where more can be observed than anywhere else in North America.

Goshawk originated as a shortened version of “goose hawk” or “grouse hawk.”

Nesting habits: Generally nests in large deciduous or coniferous trees depending on availability; often among the largest trees of the stand. Nest height varies considerably from 4 to 27 meters (13 to x 90) and usually below the canopy. Clutch size usually 2-4, rarely 1 or 5 eggs; eggs hatch in 36-38 days, and young leave the nest when 41-43 days old.

well-known cycles of lynx and hare in Canada. However, in recent years, no invasions have been observed. There is much speculation on the reasons for the lack of an invasion, but low Goshawk populations, changes in habitats and landscapes in Canada, and climate change have all been suggested.

Life expectancy: Maximum lifespan is listed as at least 11 years. However, a female Goshawk banded at Hawk Ridge on 17 October 1982 was trapped by a fur trader in Alberta, Canada on 23 July 1996. Based on age of capture it would have been over 16 years old. One Goshawk caught at Hawk Ridge on 31 October 1992 was caught again on 12 October 2004 when it was at least 14 years old. A falconer’s goshawk lived in captivity almost 19 years.