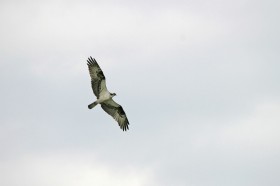 Origin of Osprey seems to come from the French word ospriet and the Medieval Latin avis predeI meaning “bird of prey.”

Hunting habits: Eats almost entirely live fish. Can dive up to 3 feet underwater in search of fish and hunts most frequently in more shallow waters. It can fish in deeper waters if fish are schooling near the surface. Most often catches fish 6-13 inches in length, and weighing less than a pound. The record catch was reported to be about 2.5 pounds. The bottoms of the feet of Osprey are covered with scales that help them grip fish and they can adjust their toes to have either 3 in the front and 1 in the back, or 2 in the front and 2 in the back- very helpful when handling slippery fish (this is called being zygodactyl).

Migrating habits: As waters cool in the fall, fish move to deeper water, so Osprey tend to leave breeding grounds fairly early in the fall.  They return after the ice has melted on the area lakes in the spring. Young Osprey sometimes avoid the hazard of migration by remaining in their wintering grounds until they reach breeding age.

Nesting habits: Prefer open easily accessible nest sites that provide height for protection. Tree tops, cliffs, and human built platforms are commonly used. Nests are built with twigs and lined with a variety of other materials. They tend to use the same nest site year after year and can become quite substantial measuring 3-6 feet across and can be over 10 feet deep. 1-4 eggs are laid and incubated 36-42 days, and generally fledge in 8-10 weeks.