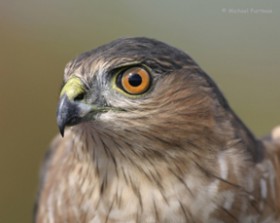 The Sharp-shinned Hawk is the second most abundant raptor observed at Hawk Ridge.

Hunting habits: Sharp-shinned Hawks primarily take small birds, some small mammals, and occasionally large insects; usually all that they catch while flying. They have become common, especially in winter, around bird feeders.

Migrating habits: Sharp-shinned Hawks can be observed migrating in mid-August and the vast majority have passed by mid-October. They are among the most reliable of the migrants at Hawk Ridge. Female sharpies tend to migrate before males of the same age, and the females winter further south than males. Based on banding returns, many sharpies migrating over Hawk Ridge generally head southeast to Illinois, and then southwest toward east Texas and Mexico.

Nesting habits: Sharpies nest in trees usually within dense forest stands and often in conifers. Nest height varies from 2-19 meters (6 to 62 feet). Usually 4-5 eggs are laid and incubation by the female for 30-32 days. The young first leave the nest when about 24 to 28 days old.

Life expectancy: Maximum reported age of a wild bird was 13 years old. The oldest banded bird from Hawk Ridge was an after-second year male banded on 18 September 1999 and recaptured at Hawk Ridge on 27 August 2009. This bird was over 12 years old and currently the oldest longevity record in the USGS Bird Banding Laboratory data base.